1.Today, I’m here to share with you my understanding of the concepts of Nation, Nationalism and Patriotism in the context of India, that is Bharat. These three concepts are so closely intertwined that it is difficult to discuss any one of them in isolation.

2.Let us make a beginning by understanding the dictionary meaning of these three words. Nation is defined as ‘a large group of people sharing the same culture, language or history and inhabiting a particular state or area’. Nationalism is defined as ‘identification with one’s own nation and support for its interests especially to the exclusion of interests of other nations’. Patriotism is defined as ‘devotion to and vigorous support for one’s country’.

3.Let us look at our roots,

India was an open society, globally connected along the Silk and Spice Routes. These busy highways of commerce and conquest witnessed a free exchange of culture, faith and invention as merchants, scholars and sages traversed mountain and desert and sailed the oceans. Buddhism reached Central Asia, China and Southeast Asia together with Hindu influences. Ancient travelers like Megasthenes in the 4thcentury B.C., Fa Hien in the 5thcentury A.D. and Hiuen Tsang in the 7th century AD; when they came to India, wrote about the efficient administrative systems with planned settlements and good infrastructure. Takshashila, Nalanda, Vikramashila, Valabhi, Somapura and Odantapuri comprised the ancient university system that dominated the world for 1,800 years beginning the sixth century BCE. They were magnets for the finest minds and scholars in the world. In the liberal environment of these institutions creativity found full form and art, literature, and scholarship flourished. Chanakya’s Arthashastra, an authoritative text on state-craft was also written during this period.

4.India was a state long before the concept of the European Nation State gained ground after the Treaty of Westphalia in 1648. This model- of a defined territory, a single language, shared religion and a common enemy- is the model which led to the formation of various nation states in Europe. On the other hand Indian Nationalism emanated from “Universalism” the philosophy of Vasudhaiva Kutumbakam (वसुधैव कुटुम्बकम) and Sarve Bhavantu Sukhinah, Sarve Santu Niramayah. We see the whole world as one family and pray for the happiness and good health of all. Our national identity has emerged through a long drawn process of confluence, assimilation, and co-existence. The multiplicity in culture, faith and language is what makes India special. We derive our strength from tolerance. We accept and respect our pluralism. We celebrate our diversity. These have been a part of our collective consciousness for centuries. Any attempt at defining our nationhood in terms of dogmas and identities of religion, region, hatred and intolerance will only lead to dilution of our national identity. Any differences that may appear are only on the surface but we remain a distinct cultural unit with a common history, a common literature and a common civilization. In the words of the eminent historian Vincent Smith, “India beyond all doubt possesses a deep underlying fundamental unity, far more profound than that produced either by geographical isolation or by political superiority. That unity transcends the innumerable diversities of blood, colour, language, dress, manners, and sect”.

5.If we take a quick look at history the emergence of the Indian State can be traced back to the sixteen Mahajanapadasmostly spread across Northern India in the 6th century BC. In the 4thcentury BC, Chandragupta Mauryadefeated the Greeks to build a powerful empire comprising of North-Western and Northern India. Emperor Ashoka was the most illustrious ruler of this dynasty. After the collapse of the Mauryan Dynasty, the empire broke into small kingdoms around 185 BC. Gupta Dynasty again created a vast empire which collapsed around 550 AD. Many dynasties ruled till 12thcentury, when Muslim invaders captured Delhi and successive dynasties ruled for the next 300 years. Babur defeated the lastLodhi King in 1526 at the First Battle of Panipat and firmly established Mughal rule which continued for 300 years. The East India Companyafter winning the Battle of Plasseyin 1757, and the Three Battles of Arcot (1746-63) brought a vast territory in East and South of India under its control. A large part of western region was also annexed to the company’s territory and to administer these territories, a modern form of government was established in 1774. To administer these territories, the office of Governor General at fort William, Calcutta and two sub-ordinate governors at Madras and Bombay were created. For nearly 140 years, Calcutta was the centre of British Authority in India. However, the responsibility of administration was taken away from the East India Company in 1858 and the Secretary of State for India was appointed in the British Cabinet to super intend the Indian Administration.

6.Throughout this period of 2500 years of changing political fortunes and conquests, the 5000 year old civilizational continuity remained unbroken. In fact, each conqueror and each foreign element had been absorbed to form a new synthesis and unity. Tagore in his poem ‘Bharat Teertha’ says and I quote “……No one knows at whose beckoning call how many streams, of humanity came in indomitable waves from all over the world, over the millennia and mingled like rivers, into this vast ocean and created an individual soul, that is called Bharat”.

7.The concept of Modern Indian State found frequent articulation by various Indian organizations including the Indian National Congress towards the end of the nineteenth century. Starting with Shri Surendranath Banerjee in 1895 at Pune, all Congress Presidents gave a call for an Indian Nation comprising the territorial areas of British India and the territories of 565 princely states. When Bal Gangadhar Tilak gave voice to the phrase coined by Barrister Joseph Baptista “Swaraj is my Birthright and I shall have it”, he referred to Swaraj for the Indian People – encompassing various castes, creeds, and religions, spread across British India, and the Princely States. This Nation and Nationalism was not bound by geography, language, religion, or race. As Gandhiji explained Indian nationalism was not exclusive, nor aggressive, nor destructive. It was this Nationalism that Pandit Jawaharlal Nehru so vividly expressed in the ‘Discovery of India’, and I quote, “I am convinced that Nationalism can only come out of the ideological fusion of Hindu, Muslim, Sikh and other groups in India. That does not mean that extinction of any real culture of any group, but it does mean a common national outlook, to which other matters are subordinated”. In the process of our movement against British Rule, the various anti-colonial, anti-British and mostly progressive movements across the length and breadth of the country were unified into a cohesive national struggle for freedom, keeping the feeling of patriotism above their individual, ideological and political leanings.

8.We won independence in 1947. Thanks to the efforts of Sardar Vallabhbhai Patel, the Princely States merged leading to the consolidation of India. The complete integration of Provincial and Princely States took place after the formation of states on the recommendation of States Re-organisation Commission.

9.On 26 January 1950, the Constitution of India came into effect. In a remarkable display of idealism and courage, we the people of India gave to ourselves a sovereign democratic republic to secure for all its citizens justice, liberty, and equality. We undertook to promote among all citizens fraternity, the dignity of the individual and the unity of the nation. These ideals became the lodestar of the modern Indian State. Democracy became our most precious guide towards peace and regeneration from the swamp of poverty created by centuries of colonial rule. For us, Democracy is not a gift, but a sacred trust. The Indian Constitution, consisting of 395 articles and 12 schedules, is not merely a legal document but a Magna Carta of socio-economic transformation of the country. It represents the hopes and aspirations of the billion plus Indians. From our constitution flows our nationalism. The construct of Indian nationalism is ‘Constitutional Patriotism’, which consists of an appreciation of our inherited and shared diversity; a readiness to enact one’s citizenship at different levels; the ability to self correct and learn from others.

I want to share with you some truths that I have internalized during my fifty year long public life, as a Parliamentarian and Administrator.

10.The soul of India resides in pluralism and tolerance. This plurality of our society has come through assimilation of ideas over centuries. Secularism and inclusion are a matter of faith for us. It is our composite culture which makes us into one nation. India’s Nationhood is not one language, one religion, one enemy. It is the ‘Perennial Universalism’ of 1.3 billion people who use more than 122 languages and 1600 dialects in their everyday lives, practice 7 major religions, belong to 3 major ethnic groups- Aryans, Mongoloids, and Dravidians live under one system, one flag and one identity of being ‘Bhartiya’ and have ‘No Enemies’. That is what makes Bharat a diverse and united nation.

11.In a democracy, informed and reasoned public engagement on all issues of national importance is essential. A dialogue is necessary not only to balance the competing interests but also to reconcile them. Divergent strands in public discourse have to be recognized. We may argue, we may agree, or we may not agree. But we cannot deny the essential prevalence of multiplicity of opinion. Only through a dialogue can we develop the understanding to solve complex problems without an unhealthy strife within our polity.

12.Peaceful co-existence, compassion, respect for life, and harmony with nature form the foundation of our civilization. Every time a child or woman is brutalized, the soul of India is wounded. Manifestations of rage are tearing our social fabric. Every day, we see increased violence around us. At the heart of this violence is darkness, fear, and mistrust. We must free our public discourse from all forms of violence, physical as well as verbal. Only a non-violent society can ensure the participation of all sections of people in the democratic process, especially the marginalized and the dispossessed. We must move from anger, violence, and conflict to peace, harmony, and happiness.

12 A. We have lived with pain and strife for long enough. You are young, disciplined, well trained and highly educated. Please wish for peace, harmony and happiness. Our Motherland is asking for that. Our Motherland deserves that.

13.Happiness is fundamental to the human experience of life. To lead healthy, happy, and productive lives is the basic right of our citizens. While we have done well on our economic growth indicators, we have fared poorly on the World Happiness Index. We rank 133 out of the 156 countries mapped in the World Happiness Report 2018.

Kautilya’s Shloka from Arthashastra, inscribed near lift No. 6 in the Parliament House says:

In the happiness of the people lies the happiness of the king, their welfare is his welfare. He shall not consider as good only that which pleases him but treat as beneficial to him whatever causes happiness to all people. Kautilya points out in this shlokavery succinctly that the State is for the people. People are at the centre of all activities of the state and nothing should be done to divide the people and create animosity amongst them. The aim of the state should be to galvanise them to fight a concerted war against poverty, disease and deprivation and to convert economic growth into real development. Let the objective of spreading Peace, Harmony and Happiness inform the formulation of our public policy and guide all the actions of our state and citizens in their everyday life. This and only this will be able to create a happy nation, where Nationalism flows automatically.

This speech was 1st published on Pranab Mukherjee’s Official Website on 7th July 2018 and was delivered at RESHIMBAGH GROUND, NAGPUR 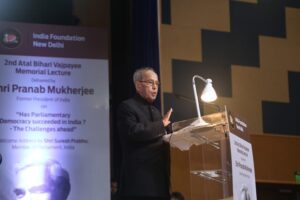